Irish Volunteer Gerald Keogh was killed at dawn on Easter Tuesday 1916 by Anzac troops defending Trinity College Dublin. Coincidentally, he was killed on April 25th, the first anniversary of the landing of the Australian and New Zealand Army Corps (Anzacs) at Gaba Tepe on the Gallipoli peninsula; furthermore, the troops who shot him were themselves Anzacs. They were on furlough in Dublin from front-line duties in France and had been drafted in to defend Trinity. More poignantly, Gerald was killed at dawn on that first Anzac Day—the very hour that Australians and New Zealanders cherish to commemorate their own fallen at Gallipoli.

Gerald’s eldest brother, J. Augustus Keogh—who lived in London where he was stage manager at the Royalty Theatre—on hearing of his brother’s death, immediately made moves to return home. He convinced W. B. Yeats and Lady Gregory that he was well qualified to become manager of the Abbey Theatre in the aftermath of the troubles and, indeed, during the troubles which the Abbey had experienced with its former manager, St John Ervine.

Being an aficionado of G. B. Shaw, J. Augustus gave this playwright a valuable theatrical presence in Dublin after Shaw had criticised the execution of the 1916 Irish leaders. Shaw’s box-office appeal in England slumped but Dublin audiences were swamped with his works.

This is how an Anzac bullet came to boost Shaw’s theatrical presence in Dublin in 1916.

A photo of Gerald Keogh is shown (below left). Also shown (right) is a photo of Michael McHugh (Anzac sharpshooter—of Irish descent) who was among the troops that gunned down Gerald in Grafton Street. 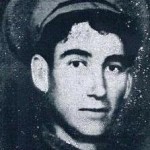 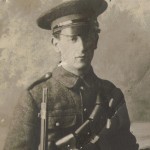 The poignancy of Gerald’s death is captured in the song Digger in Dublin composed by songwriters Kevin McCarthy and Geoff McArthur in which Mick McHugh laments his part in the killing of Gerald.

1916: Incredible meeting as families on opposite sides reconcile after 100 years 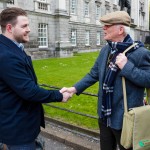 Patrick is great-great-nephew of Mick McHugh and Raymond is grand-nephew of Gerald.

Mick was ordered to defend TCD during Easter week and is reputed to have killed Gerald while the Irish Volunteer was carrying out direct orders from Patrick Pearse. Full story here