The definition of “personal identity” and “communal identity”, based on DNA and the human genome, was first proposed in Shelter and Shadows in 2016. 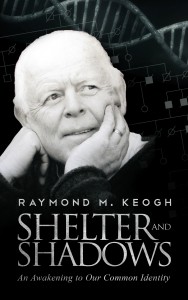 Shelter and Shadows has been described as a “personal odyssey”. It reveals what it is to be born and live between two worlds that emerged from conflicting Irish traditions. In a lifetime quest to resolve his dilemma, Raymond M. Keogh traces the origins of his contradictory ancestral legacy. The outcome is the story of a hybrid family; its complex social histories; its interweaving genealogies; its genetic profile and its identity.

Coming to terms with ancestral conflict and cultural incompatibility awakens a revolutionary view of our common universal humanity. Ultimately, we are presented with an uplifting exploration of the meaning of human identity.

Raymond Keogh is to be congratulated on a highly unusual book which is hard to classify. Perhaps it is best described as a personal odyssey through his familial past which brings him to see that out of all our personal, tribal and racial conflicts must come a better undertanding of our common humanity … The extent and depth of the author’s musings … taking into account history, anthropology, genealogy and genetics is impressive.

Shelter and Shadows … offers us a foundation on which we can build certainty of who we are.