This website hosted The Gerald Keogh Identity Series, a popular collection of features that ran online from 2015 to 2017. It consisted of 26 articles on identity and a three-part essay on Irish national identity. They have been removed from the site and their salient issues have been incorporated into a new book whose provisional (pre-publication) title is: Irish Identity Today

In early 407 there was growing concern in Britain about the invasion, and Roman troops crossed from Britain to Boulogne. This represented the field army of the province. Lack of troops in Britain caused a revolt in 409 against undefended authorities and the Armoricans followed suit and freed their land from Roman rule. It is highly probable that most Romans abandoned Armorica (Brittany). It is not difficult, then, to imagine how the Roman presence could have disappeared precipitously from the area.

The opposing population of Armorica appears to have come together and joined forces to have caused the revolt of 409 in the first place. An amalgamation of dispersed local inhabitants and an abandonment of coastal towns and villas by loyal Roman citizens would have left large areas of the coastline and countryside almost devoid of people. All domestic food supplies would have been used or taken away by the local population, as they would have been conscious of general food shortages in Gaul caused by Germanic tribes. There was strength in numbers and Armorican inhabitants were offered few alternatives: leave with the Romans, join the revolutionary force or remain in vulnerable isolation. The main revolutionary force moved through the area like a swarm of bees to protect itself against Roman reprisals and to defend itself against a possible incursion by the Germans. Activities on the landward side of the region, around the Loire, strongly suggest they concentrated here, providing a double advantage: firstly, to defend Armorica against the Germans and, after this threat diminished, to exploit the chaotic situation beyond their territory where they plundered at will.

All this adds up to one possible explanation for Patrick’s escape. The ship may have been a

trading vessel that reached Armorica after the 409 revolt began and after the amalgamation of the local population, which would explain why Patrick and the crew with whom he travelled, did not encounter people where they expected them to be. Dispersed and vulnerable individuals, if they did exist on the route followed by Patrick, may well have chosen to disappear into the shadows of the undergrowth than confront, what to them might have been the first wave of a hoard of Germans. In conclusion, there are good grounds for believing the narrative as related by Patrick about his escape. There are good reasons, also, for fixing it in 409 or shortly after. Rather than accusing Patrick of lying or fabricating a cover-up, his words provide us with clues to his chronology. By fixing his escape to 409, we have, through his own words, the date of his birth which occurred twenty-two years before this incident (in 387) and the date of his captivity which happened when he was sixteen (in 403).

The GKIS was named after Irish Volunteer Gerald Keogh, granduncle of Raymond Keogh. Gerald was gunned down outside Trinity College Dublin on Anzac Day 1916 (see here). Mick McHugh (headshot above) was said to have killed Gerald.

“… a valuable–and provocative–challenge to the dominant narrative“

“A great series of articles …” 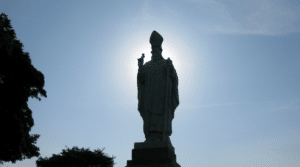